On last weekend I took an entire Saturday and celebrated all things artsy. Ever since I moved to Orlando, I’ve always wanted to attend Artlando, a 1-day festival that celebrates various forms of art, but I always had to work and this year was the first time I was off. So I was ecstatic! I love art and I love watching performances and this festival seem to have it all. Here are some of my favorite highlights:

I arrived at the park using a Juice bike. Juice Bike is the new bike-sharing program here in Orlando. I got a chance to first try this out during a city bike tour I went on a few months back. If you’re interested in touring the city by bike you can find bike stations all throughout Downtown Orlando, the Loch Haven area and in Winter Park.

Two words. Food Trucks. The festival featured some of my favorites from the Tasty Tuesday’s events so this was a definite score for my belly. LOL.

I got to attend the event VIP style. Thanks to the Orlando Weekly I won a VIP ticket to Artlando when I attended Tasty Tuesday’s in the Milk District. I was super stoked! Saturday was a scorcher and if you had VIP, you got to sit underneath a shaded tent, you received 14 drink tickets (lots of soda and water for me, Yay!), and a complimentary T-shirt. The other cool thing about having VIP is that you get to meet perfectly awesome strangers. One gentleman I met works with graduate students in the Health Communications field. Another gentleman I met is a veteran and does YouTube videos to help people relax. His friend that he was with is a former makeup artist and works for Ripley’s Believe It or Not, one of the most curious’ places in America. Conversation with these two was refreshing, inspiring, and enlightening. Needless to say, I had a blast.

The main stage is where most of the performances took place. On the main stage I watched an explosive science experiment, several ballets, and a fantastic accapella group from UCF.

The art vendors were really cool too. My favorite booth of them all was the Poetry Vending Machine. How the poetry vending machine works is that you give the writers a title for your poem and three words. After your submission, that turn your title and along with the three words given and turn into a beautiful piece of poetry in 20 minutes.

Overall, Artlando was a fantastic time. I can’t wait for next year’s event. Check out my pictures below from the event. 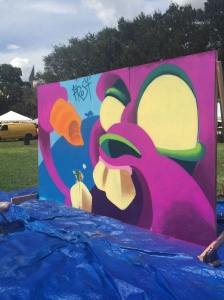 1 thought on “Out on the Town: Celebrating All Things Arts at Artlando”